The Adventures Of Zlita Slave Huntress From Outer Space is an interplanetary saga raging from one end of the Galaxy to the other, on the trail of a charming young slave huntress, a dashing officer freshly out of the Imperial Space Academy of planet Sleeek, the planet at the heart of the Amazon Empire, siege of the Empress. When she is not hunting or trying to secure ever larger supplies of males (the slave trade is permanently booming in the Empire), Zlita is pursuing her arch-enemy Vulka, the ruthless pirate girl. 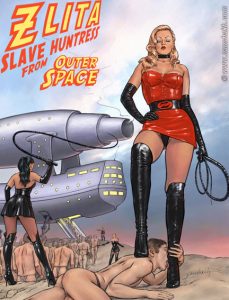 Both young women were together at the Space Academy, both are consumed with ambition and both have chosen the slave trade as an easy and exciting way to satisfy their greed and their thirst for power. Also, both have known each other from early childhood, being the heiresses of two of the noblest and oldest dynasties of Sleeek, with their family estates contiguous to each other. As if that was not enough, both their mothers have been very old and good friends. It seems everything destined these two aristocratic girls to be the best of friends, almost sisters, when in fact it all concurred to separate and oppose them. One is an angelical looking buxom blonde, the pride of her mother, of the Imperial Space Academy and of the Imperial court of Sleeek. The other is a brunette. 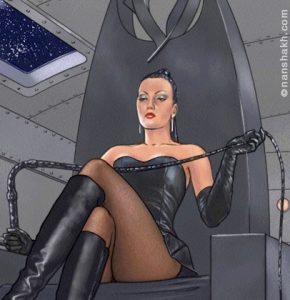 As if that didn’t say enough, the latter, Vulka, has been the bad girl from an early age, showing dispositions to antagonise any form of authority and a notable talent to scandalise all the Sleeekean good society. A rebel.

To be perfectly honest Zlita’s adventures are not that breathless. One of the reasons undoubtedly being the excruciating slowness of the author. That said, one has to bear in mind that adventures in outer-space tend to happen at a rather slow pace.

‘that Galaxy, or ‘the Milky’ as people familiarly refer to it in Outer Space, is criss-crossed from one end to the other by spaceships with utterly bored crews and passengers’

If only because even at the amazing speeds reached by the most advanced spaceships, and we are talking here about thousands of times the speed of light, yet interstellar travels are so long, but so so very long. Really it’s exasperating. To put it simply, that Galaxy, or ‘the Milky’ as people familiarly refer to it in Outer Space, is criss-crossed from one end to the other by spaceships with utterly bored crews and passengers. So much for hair raising pursuits in space. A high speed chase between spaceships through the Galaxy would be significantly less breathless and scary than a pursuit with gondolas through the canals of Venice four centuries ago.

Arrogant women, born to rule, spoiled from the cradle, raised in the most superfluous luxury, surrounded by myriads of slaves whose lives are worth less than that of insects

No, the real interest of the Zlita space opera, it’s the Women. Oh right! and the Outer Space stuff too, of course. You know, ‘all’ the rest of the Galaxy, ‘all’ those millions of worlds that we Earthlings could not possibly imagine. Plenty of exoticism there, sure. But what really matters, it’s the Amazons. Imagine that, a huge, hundreds of thousands years old empire of dominant women. Arrogant women, born to rule, spoiled from the cradle, raised in the most superfluous luxury, surrounded by myriads of slaves whose lives are worth less than that of insects. Educated by their mothers to be naturally imbued with their power, their absolute superiority and their mission to expand their Female Supremacist empire to the entire Galaxy. 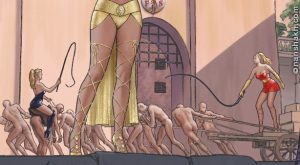 The young Amazons of Sleeek are trained to conquer, vanquish, and enslave. Males, enslave males, of course. They have no grudge against any other living creature of the universe. It’s just the males. They do not really hate males either, it’s just that males were born to serve, and the thought of any male not being enslaved to them is quite upsetting. Male slave labour is the vital fluid of their Empire. A formidable empire controlling a large part of the Galaxy.