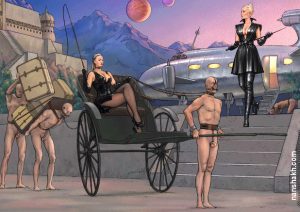 ‘There all is order, luxury, serenity and voluptuousness.’

Now haven’t you ever dreamed of such a world? Well, it’s out there, all around us, already occupying a large part of our Galaxy. And of course it is far more formidable than you could have ever imagined in your wildest fantasies. More than a utopia, it’s a reality. And it’s a perfect world. THE perfect world. Bright, elegant, harmonious, luminous. As the poet used to say, there all is order, luxury, serenity and voluptuousness.

Of course for males, the picture is somewhat different. It’s not all that bright, luxurious and voluptuous. Quite the contrary in fact. Like in any perfect world it’s quite natural that some have to pay the price for all that perfection. And perfection is not cheap, as anyone knows. It’s always the same routine, the omelette, and the broken eggs. (Yes, broken eggs. No, of course not, the pun was not intended.)

Anyway, so it’s the males who have to foot the bill, and isn’t that wonderful? So fitting actually. In a Female Supremacist world, what more appropriate role could be devolved to males than to be reduced to the most abject servitude? Males were born with that sole purpose, to be sacrificed, to be broken and conditioned into docile tools only destined to serve and toil for the benefit of their superiors, their feared and revered Mistresses. Actually they love it. They really do. 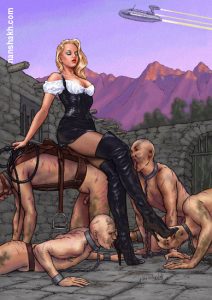 Any Amazon of Sleeek could easily demonstrate to a visitor how happy and grateful her slaves are to sacrifice each and every minute of their lowly existence to serve her, to provide her with all the wealth and power and comfort she is entitled to. And the reason why the males are so happy to do it, no matter how harsh and abject the conditions of their servitude, is because it is their true nature as males to serve. They relish in the hardship, the oppression, the degradation that is their lot. It is their happiness to be exploited mercilessly, knowing that their suffering contributes to the wealth and comfort of their adored mistresses. What could slaves do with the luxury and leisure anyway, or indeed the power that is the privilege of the women? Obviously they wouldn’t know what to do with it, they would be lost, and that would make them unhinged.

‘One only needs to look at our deplorable little planet. What went wrong is that somewhere along the line males got in charge’

One only needs to look at our deplorable little planet. What went wrong is that somewhere along the line males got in charge. Evolution was derailed, mixing technical progress with retarded superstitions and uncontrollable violence. In a frenzy of paranoia psychopaths obsessed with power but usually still putting their faith into some primitive, supposedly omnipotent and spitefully misogynistic bearded god have saturated the planet with nuclear weapons, waiting to see who would be the first one of them to initiate global destruction. Other megalomaniacs are playing a sick game called the markets to concentrate into their hands riches that they could never spend in their lifetime, in the process wrecking the economy, plunging the rest of humanity into poverty, when not complete misery, and worse of all, poisoning the planet and eradicating other animal species. That’s what happens when men are in charge. Not surprisingly, our planet has been evaluated as being out of control and spiralling into self destruction by the rest of the Galaxy and therefore quarantined indefinitely. Just as it had reached its industrial age and was on the brink of its space age.

And planet Earth is not an isolated case. A large part of the Galaxy is still in the grip of similar patriarchal perversion. These primitive worlds are united under the banner of a federation named… The Federation. Yes, indeed, how original! It’s the males you know, what could you expect?

And it is that scourge that the Sleeekean empire has to combat. Of course it’s a fight of galactic proportions (well, it’s a galaxy, after all). And it’s a war that has been going on for such a long time, thousands and thousands of Earth years. The Amazons have to fight the Federation almost all over the Galaxy. Of course they are bound to prevail. They are the good girls. The males are the bad boys. Let there be no doubt about that. But still, it’s a difficult struggle, and a confrontation that might still endure for thousands more years probably.

But that’s only part of the Zlita saga. The main purpose of that story is to show the daily life in the Empire of Women. It’s difficult to imagine for Earthlings, even those who are sympathetic to the idea of Female Supremacy. What is the social structure of an Amazon world? What are the mundane aspects of life in a millenary matriarchal society? What can be the mindset of Amazons who have been ruling the most powerful empire of the Galaxy for so long? And of their slaves? It would certainly seem strange to many an Amazon of Sleeek, but in a pure spirit of scientific curiosity we have also decided to describe the Sleeekean Female Supremacist society not only from the viewpoint of the Mistresses -the only one of interest, really- but also from that of their slaves. We know that many readers feel some kind of weird interest if not even empathy for the lowly creatures. 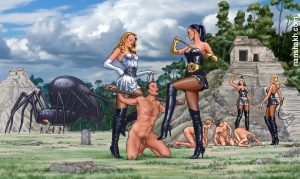 ‘there are those unruly pirate slave-huntresses marauding around’

Maybe some male readers are contemplating the possibility of ending up under the yoke of these wonderful women? Not an altogether impossible prospect really, as Planet Earth has been a reservoir of raw male material for the Amazons of Sleeek for ages. Of course this predation has somewhat slackened since the planet is quarantined, but still, there are those unruly pirate slave-huntresses marauding around, you know. So, better show some caution if you are wandering in some remote part of our planet and you see a strange vessel obviously coming from outer-space. Or, if that’s what you dream of, jump on the occasion, but be careful what you wish for.

There, the stage is set. Come visit the Empire of Sleeek.
In the Zlita folder in:
http://nanshakh.com/fsp6.htm