The Underground Life in Imperia-Laboria’s 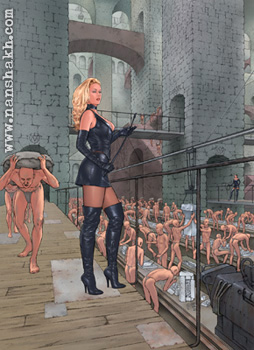 The Latest picture uploaded to the Zlita Story folder, in the website, shows the underground life in Imperia-Laboria.

When we Earthlings talk about the underground life of a large megalopolis, we often refer to some avant-gardiste, even elitist group of people, such as artists, trendsetters, socialites, forming a rather confidential cultural group on the margin of mainstream society.

On Imperia-Laboria, the Underground refers to quite the opposite. There it designates not an elitist group of insiders, but rather the ignored mass of males at the lowest strata of society. Laborious and despised, kept captive below the surface of the infernal planet, in the dark subterranean maze of factories and sweatshops where the light of the sun never penetrates. They are the silent, insignificant, innumerable ants toiling endlessly, without ever any respite or any hope of escaping their condition. They come from all the confines of the Galaxy, from such a variety of worlds, societies, cultures. Yet, now that they are enslaved by the Amazons they all look alike, totally interchangeable, shorn, their naked and emaciated bodies bruised and marked by the whip. All these males have one thing in common: they all, at one point in their life, made that fatal encounter with the Amazons of Sleeek and from that moment on they have been the slaves of their captors.

Of course all that is old news, we’ve been dwelling on Imperia-Laboria for some time now, the infernal planet whose reputation is such that the mere mention of its name sends shivers down the spine of any men in the Galaxy. And for good reasons too. For males, that industrial hell deep inside the galactic Empire of Sleeek is literally a black hole. It is so greedy for male labour that it drains all the available resources of slaves on the market, further creating such a demand that thousands of pirate ships are scouting the Galaxy and venturing deeper and deeper into the Federation territories to capture always more males. And as a black hole, it never let any male it engulfs reappear again. There is even a law forbidding any slave from leaving the planet under any circumstance, with the few exceptions of personal slaves of visiting Amazons. Since there is never enough male labour, it is only natural that the mistresses are overworking their beasts of burden to the limit, and far beyond, subjecting them to the harshest discipline and the most degrading living conditions. Not that males’ fate is much rosier in the rest of the empire, but here on Imperia-Laboria, it’s even worse.