That irrepressible urge for remaining ignored.

The latest update made a few days ago in the Zlita folder of the website is a detail of a larger illustration that will be uploaded in a couple of weeks. It’s called The Shot, and the full picture depicts…  well, I’m not going to tell you what the full picture will be, am I? 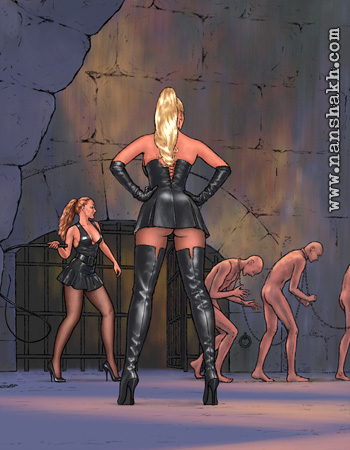 The scene is taking place in the lower levels of the vaults under Vulka’s Palace-Factory. A flock of slaves newly captured by Vulka is being led into a vast stone hall, under the guard of young Amazons. The terrified captives already have that vile, cringing demeanour so common to all slaves, as captives of the Amazons quickly learn that this is the attitude, the only proper attitude really, that will be tolerated by their mistresses.

It’s an instinct that comes from being permanently exposed to the crack of the whip, for any reason, and no reason at all…

For the spoilt and conceited Amazons who have been used from the cradle to look upon males as docile beasts of burden only destined to serve them, slaves must display at all times a fearful slavishness. That implies being always bent humbly, lowering themselves and showing eagerly an utter vileness in the presence of their superiors. 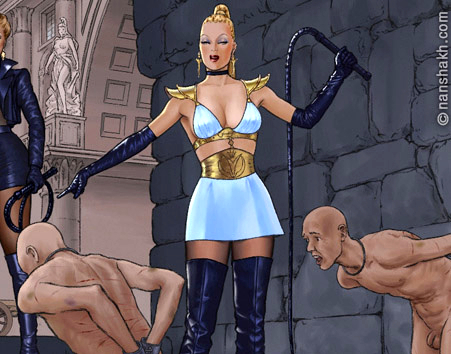 It’s not something slaves even need to be taught, it’s an instinct that comes from being permanently exposed to the crack of the whip, for any reason, and no reason at all, at the whim of their capricious owners. A submissive body talk that comes naturally. The mistresses expect their slaves to be vile, always, and any behaviour that could pass for a pretence of some self respect or some semblance of dignity would immediately be seen as provocative if not even rebellious by the Amazons, and punished accordingly and swiftly.

Not only slaves learn never to raise their eyes at their mistresses, but they must always show their willingness to lower themselves before them, and that means to bow permanently, to bend to be lower than the eye level of the women to avoid attracting any attention. 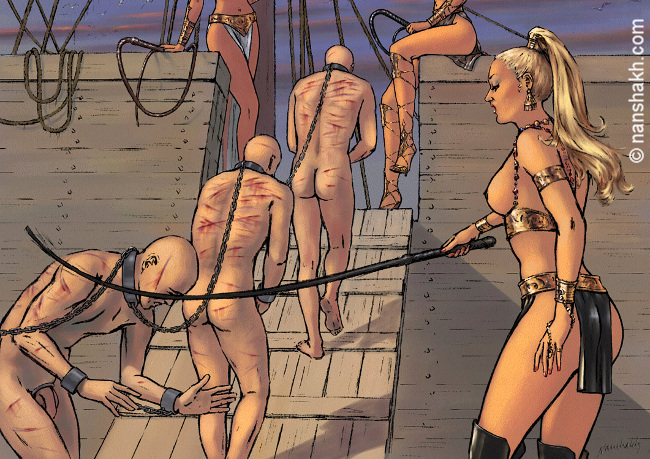 The essence of servility is to remain always insignificant, unnoticeable and even negligible. To remain ignored while serving and toiling is the best a slave can do for self preservation. Hence it is the hallmark of perfectly trained slaves to have no expectation, to never seek any other acknowledgement and indeed reward than utmost indifference from their mistress. Forgotten, relegated to the status of obedient domestic animal or even furniture, they relish in her conceit, as it not only signals that their service is sufficiently perfect for their very existence to remain almost forgotten, but it accentuates the distance that separates them from her and heralds her absolute inaccessibility.

Hope, the very notion of hope or expectation for a slave is the insidious seed of entitlement that will feed the subservient male’s ego.

That is the only form of slavery that is feasible in the long run in a Mistress/slave context. The servitude that is fully liberating and fulfilling for the Mistress. And not only for the mistress but for her slaves too. It provides the uniform, unwavering oppression that will not allow them any hope, and such resignation is the foundation of complete servitude. Enslavement means submission, submission implies surrender, which is acceptance. Hope, the very notion of hope or expectation for a slave is the insidious seed of entitlement that will feed the subservient male’s ego. Hope is not conducive to acceptance.

For a Mistress, it is not tolerable to have a slave who, like a dog, is always seeking attention, trying to establish a mutually rewarding relationship. Such a slave, permitted however menially to expect something, anything, in return for his services or good behaviour, will always let his expectations grow and make him increasingly unsatisfied and demanding. It’s a greedy dynamic that can only keep growing and will never stabilise, unless it eventually results in transforming the Mistress/slave relationship into an affective exchange based on compromise and conditional submissiveness. Such relationship between woman and man is more commonly referred to as marriage.

It is only when a Mistress has completely broken her slaves and conditioned them to the point where their craving for servitude feeds itself with the very harshness and degradation of their abasement that she will be able to fully rely on their undying devotion. 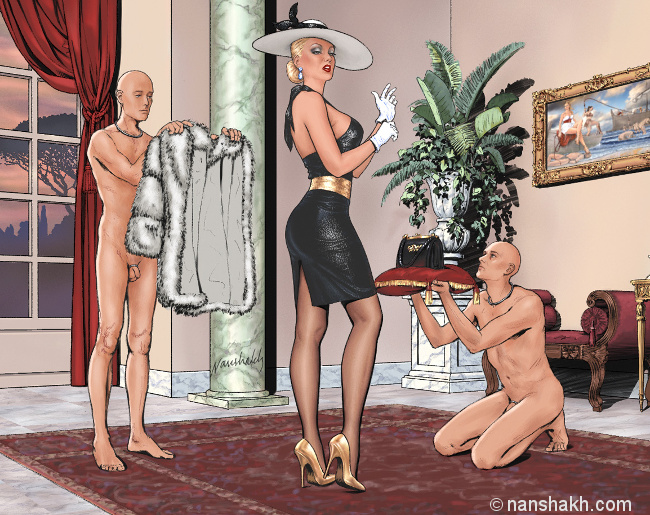 Then it is the servitude itself that brings its own reward and the slaves will never grow disappointed, as they know not to expect anything from their Mistress apart from indifference and disdain. The sacrifice, the hardship, the suffering, the implacability of the yoke are their only solace and their prize. The broken beast within them, now deprived of any ego, has been conditioned to not seek any other reward, hope or escape from their condition. On the contrary, the never ending conceit and exigencies of their Mistress will keep spurring them to always more selflessness and sacrifices, thus empowering them.

And a mistress doesn’t want weak slaves, she wants powerful, resilient slaves who are willing and capable of embracing any hardship, any degradation and punishment in order to satisfy her, regardless  of consequences for their well being and their safety; slaves whose only  pride is the full contentment and happiness of their living goddess.