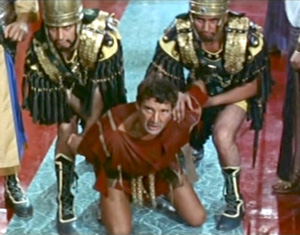 But wait, it even gets better: he wouldn’t kneel! Two guards force him down. The Queen sneers: ‘I suppose a Roman can’t kneel?’
‘Not in front of a treacherous Queen, no’ answers the Roman quite futilely now that he is on his knees, anyway.
The Queen waves the guards away, comes down and stands proudly in front of him, sneering (again). 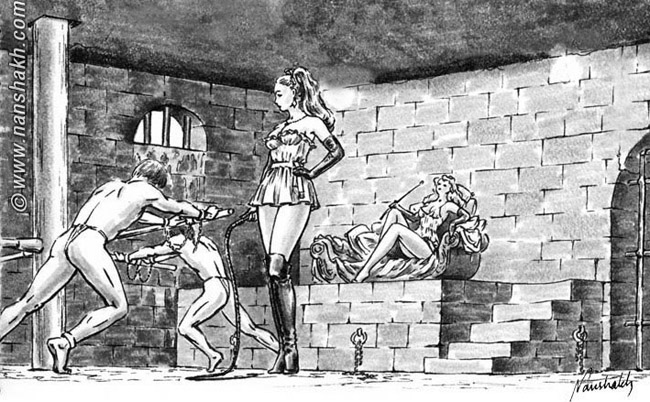 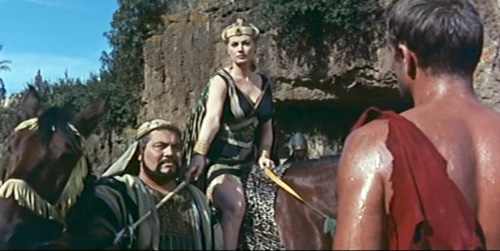 They have a little chat but the miserable wretch is being insolent again.
‘Put him back on the cross’ orders the Queen. Understand now why she had him brought to her? If she had gone to speak to him on the cross instead, all she might have said to show her displeasure at his insolence would have been a “leave him on the cross”, not quite so impressive really. While instead now she could meanly order her guards to attach him back to the cross. Ha!

But first let’s give it all some context. Queen Zenobia is not the usual young Queen from antiquity with all the bling bling and the heavy make up trying to seduce the most powerful Roman of the moment to save her country, she’s not some common Cleopatra. At a young age she decided to seize power, and beat the crap out of the Romans to carve out a nice little empire for herself, from Anatolia to Egypt. Romans usually didn’t like that kind of effrontery.

And what happens to Zenobia? Last time we see her she is sitting pretty in the gardens of her Roman villa, smiling sweetly at her husband who’s stepping down from his sport chariot, just back from work. Guess who?

Ok, conventional and disappointing ending. Yet maybe not so much. There are remarkable points in that swords & sandals movie (which I warmly recommend).
End of part 1